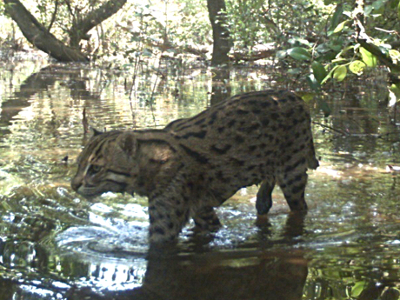 Giridhar Malla will give a presentation titled The role of mangroves in safeguarding the vulnerable Fishing Cat in South India at the Mangrove Symposium of the IUCN-SSC Mangrove Specialist Grouphosted from 12 to 17 September by the Leibniz Centre for Tropical Marine Research in Bremen, Germany.

Get the rest of the story at http://www.fishing-cat.wild-cat.org/

Happy New Year to all of you!!
Cheers,
Angie

I just returned from a visit to Sri Lanka.

Attached see pics of our road signs, and the rehab enclosure we built. It has two residents. We buy the materials, the land belongs to government, and the army builds it according to our drawings, at no cost to us. They also pay for half the food costs.

The cats love the running water as you can see. When we turned the pump on both cats ran from the box and onto the top of the waterfall.

One cat who had been snared, had severed the tendons in a rear leg, but still can make it to the top.

And he can still catch fish.

A rusty-spotted cat came in and had to have its leg amputated. We now need another $4,000.00 USD to build a similar enclosure for rusty-spotted cats. He is currently at the vet, and was destined to be sent to a terrible zoo.

Instead, Ashan Thudugala is already designing the dual enclosure. I don’t think this enclosure will need a pool or waterfall but its hard to imagine any cat in Sri Lanka avoiding water.

Next week an International film crew will be filming the fishing cats at the center.

Thanks for all your help.

“As far as I know this is the best fishing cat enclosure in south Asia which has more space, cages, pond with live fish and a waterfall. Currently we have two fishing cats in the cage and we already released two wounded cats after treating.

But as Jim said, we plan to build a another cage for rusty spotted cats at the same place. Thank you again.

On 13 September, Dan and Honey Jones and I sighted a Pallas’ cat south of Flower Lake in the Ruoergai Grasslands, Sichuan, China. This was my first sighting of this cat in the area for three years!!! This location is just a few hundred meters away from where I sighted the Chinese Mountain cat in autumn last year.

The Pallas’ cat was sitting on a high pile of stones at a disused quarry site. We scoped from around 300 m and watched for around 5 minutes. It was very wary, observing passing motorbikes, and finally disappeared when we got within 200 m of the site.

A million thanks to all those, who supported the work of our members!

It was a Friday. A very boring Friday. Well, at least I think it was a Friday… Either way, it was a dull day. I was doing my usual annoy the dogs routine when I got a call.

A call about a fishing cat.

At first, the call was just boring old work stuff, and I think the topic of the cat just happened to pop up. It may have been a phone call about work, but then Maalu, being the sneaky devil that he was, quietly slipped into the conversation.

“Ade, guess what? We are looking after an orphaned fishing cat.”

“A what now?” At the time I was researching leopards, and knew very little about fishing cats.

“A fishing cat. Your uncle did a study on them 6 years ago. Come see it.”

Of course at this point the only thing that I could think of was OH MY GOODNESS I HAVE TO SEE THIS THING NOW!!! But I calmly said yup would love to, and got off the phone – I couldn’t really start squealing like a little kid who was promised a puppy, could I?

The next day I was ready. With my camera in hand, I set out to see this fishing cat. When I got to the location, which the cat called home at the time, I proceeded to tiptoe into the room, and then I saw him.

There he was sitting on the ground, with a soggy fuchsia sock in his mouth. Eyes wide. Paws tucked under. Stubby tail twitching. The only thing that could remotely explain what I thought at that point is perfectly depicted by Agnes from Despicable Me, when she sees the pink and white unicorn at the carnival. Only difference was that I couldn’t grab him and run off.

DENVER (AP) — Scores of fierce-looking lynx roam the remote Colorado high country, 16 years after they were reintroduced to the state. But the elusive animals are rarely seen or photographed.

Odell estimates 200 to 300 lynx live in Colorado but no one knows for sure. He hopes to get several years’ worth of data to track their range over time.

Some key questions about lynx and the monitoring program:

Lynx are medium-size cats with delicately tufted ears, short tails and broad, kitten-like paws. They can be nearly 3 feet long and weigh as much as 30 pounds. Their big paws work like snowshoes, helping them walk across powdery snow, Odell said. They’re widespread in Canada and Alaska but scarcer in the 48 contiguous states, where they are protected as threatened species under the Endangered Species Act. They primarily hunt snowshoe hares. 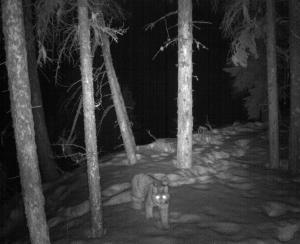 In this Feb. 9, 2015 photo, provided by the Colorado Department of Parks and Wildlife, a rare lynx i …

WHERE ARE THEY IN COLORADO?

Colorado began reintroducing lynx in 1999 after they disappeared from the state in the 1970s because of hunting, poisoning and development. The lynx were captured in Canada and Alaska and released in the San Juan Mountains. The transplanted cats began having kittens by 2003, and Colorado-born lynx have been having kittens ever since. They mostly live in spruce and fir forests above 9,000 feet elevation.

WHY TAKE THEIR PICTURES?

The cameras are part of an effort to see how much of their potential habitat the lynx are occupying. Researchers randomly chose 50 plots of land, each one about 29 square miles, and began monitoring last winter. They also visit more accessible plots on snowmobiles or skis to look for lynx tracks, scat and fur.

WHY NOT JUST COUNT THEM? 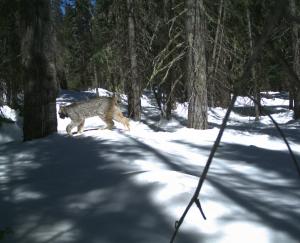 In this March 14, 2015 photo, provided by the Colorado Department of Parks and Wildlife, a rare lynx …

Counting lynx is expensive and labor-intensive. Unlike some species, individual lynx aren’t distinguishable by appearance, so they have to be captured multiple times to document their status, Odell said. The study is also less invasive.

HOW DO THE CAMERAS WORK?

The cameras’ motion detectors trigger the shutter when animals walk into view. At night, they use an infrared flash so the lynx don’t know they’re being photographed. Crews seal the battery-powered cameras inside weather-tight cases and mount them in trees before the snow begins to fall and retrieve them after the snow melts. Odell expects to deploy 124 cameras this winter, about the same as last winter.

WHEN WERE THE PHOTOS TAKEN?

Researchers got some lynx photos in 2011. Last winter was the first season for the full study. Odell hopes the state will fund the study for 10 years.

HOW MUCH DOES THIS COST?

Arash Ghoddousi wrote:
This Pallas’ cat was photographed in Khosh Yeylagh, one of the oldest reserves in Iran, after more than 10 years since the last observation. The cat was accompanied by a cub.
Khosh Yeylagh reserve is located in the east of the Alborz Mountains in northern Iran.
This and one more photo by courtesy of Iran Environment and Wildlife Watch.

Nasanbat Battogtokh sent this photo and wrote:
On 29 June, one of our camera traps captured a Pallas’ cat near “Suuj” spring behind “Tsagaan bogd” mountain in the Trans-Altai Gobi, Mongolia.

Meet Ret Thaung and her team in coastal wetlands of Cambodia. See the first videos now at www.fishing-cat.wild-cat.org

And the other good news is that Ret will come our symposium in November. We all look forward to meet her soon!!

Don't worry. We hate spam and won't sell or share your info. Newsletters are infrequent, so if you want to hear from us every time there is something exciting posted here, scroll down and add our RSS feed to your reader.

Saving wild cats in the wild

Join me on Google +